Bridgeport, NJ – The temperatures felt like August but that was nothing compared to the hot action on the high banks of the Bridgeport Motorsports Park on Saturday night with racing sponsored by Ice Less.

Defending Bridgeport Champion, Ryan Godown raced to his third point contest of the season but this win came after a battle for the lead with Neal Williams and Sal DeBruno’s No. 0.

Polesitter, Roger Manning led the field to the green and then grabbed the lead for the first nine laps of the Danny’s Pizza Pizzazz Modified feature event. Dominick Buffalino quickly raced into second but was forced to pit for a tire change during a lap seven caution.

A lap seven incident saw the cars of Carson Wright and Joseph Watson getting together between turns one and two and with nowhere to go, Mike Franz rolled his No. 2. Watson and Franz were headed to the pits, their race ended with nine complete.

Williams grabbed the lead on the restart and led Godown, Billy Pauch Jr., Manning and Tommy Beamer. Pauch grabbed the runner-up spot on the next lap.

The yellow waved again as Ron Roberts and Matt Stangle got together on the backstretch, collecting Ryan Watt. Watt continued but without most of the right side bodywork on the No. 14w.

Williams led the way to the crossed flags ahead of Godown, Pauch, Manning and Watt.

Godown had the lead on lap sixteen with Williams and Pauch battling for second. Pauch took the spot but Williams came right back. Pauch had the runner-up position when lap twenty was scored.

Godown led the rest of the way to take the win over Pauch and Williams. Beamer had a strong outing in the Thornton No. 31 to finish fourth with Buffalino rebounding from his early race issue to finish fifth. Richie Pratt Jr. finished sixth followed by Ryan Krachun, Matt Stangle, Manning and Sam Martz Sr.

Bryan Brobst, in just his second full season of competition, picked up the win in the Precision Hydraulic & Oil 602 Sportsman feature event. Brian Papiez held the lead over Brobst and Matt Ellery with seventeen laps scored when the race leader was involved with a spun car under the caution. Papiez sustained significant front end damage and was sidelined for the remaining laps.

It was a very popular outcome in the Bridgeport Motorsports Park Street Stocks as Nick Sandone raced to the first win of his career, beating Lee Allen to the stripe to grab the checkered flag.

Hoffman Speed Supplies heat races were won by Wayne Weaver, Travis Hill, Matt Ellery and Ryan Godown, Jr. with Nick DeSantis picking up the win in the B Main.

Nick Sandone brought a legion of fans along with him when he started this journey with the Bridgeport Street Stocks and they have been there to support their driver each and every week. In addition to preparing the car for Saturday night competition after the mid-week event, Sandone was also faced with a medical situation. None of that came to mind as Sandone celebrated in Weaknecht Archery Victory Lane on Saturday with all of his friends, family and crew.

After leading every lap of the Ice Less sponsored feature, Sandone was able to fend off the challenges of Lee Allen to take the win. Mike Hughes finished third followed by Jeff Dirkes and Ken Moren. Sandone acknowledged the Street Stock division as a close knit group who offered their help and assistance to him in whatever way it was needed.

Tim Jones picked up the win in the fifteen lap Cassidy Painting 4 Cylinder Feature event for his first Bridgeport victory. in what was a very competitive race for this division. Chris Carroll finished second followed by Justin Dunn, Joe Garey, Jr. and Jonathan Pitcher.

Pitcher took the win in the Scrappy’s Auto Service qualifier.

Thomas Prychka was the winner of the first DA’s Auto Body & Repair Rookie feature by leading just one lap – the most important lap – the final one. Vince Malcolm led the first six laps but a flat tire and contact with the back stretch wall on the final circuit took him out of contention. Second generation driver, Dan Hulmes finished second followed by Malcolm, Mike Baldwin and Deana Cogdill. This is a very promising group of Rookies for the class of 2022.

The Bridgeport Motorsports Park will be the scene of the Monster Truck Throwdown this coming weekend. Shows are scheduled for 7pm on Saturday and 2pm on Sunday. Tickets are available online. Racing action returns to the Spirit Auto Center quarter mile and the high banks of the Bridgeport Speedway the following weekend. 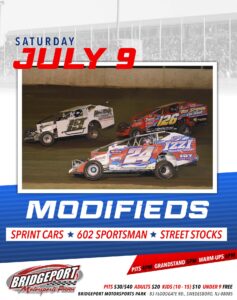 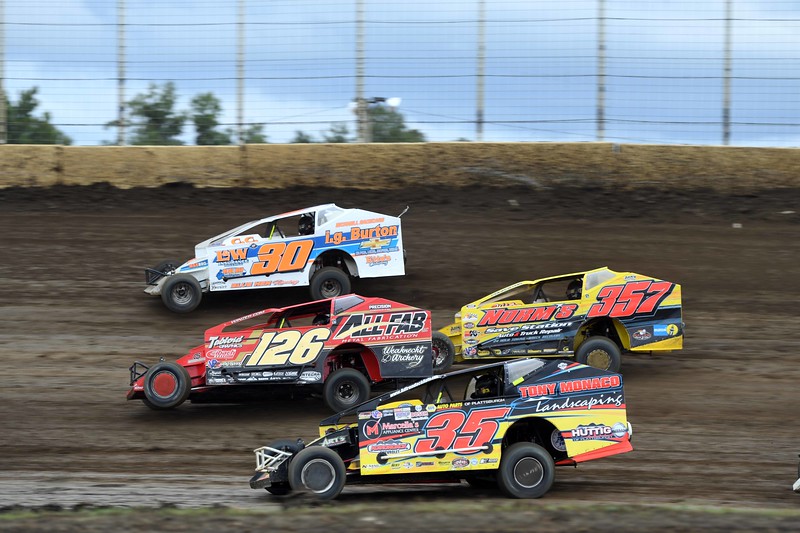 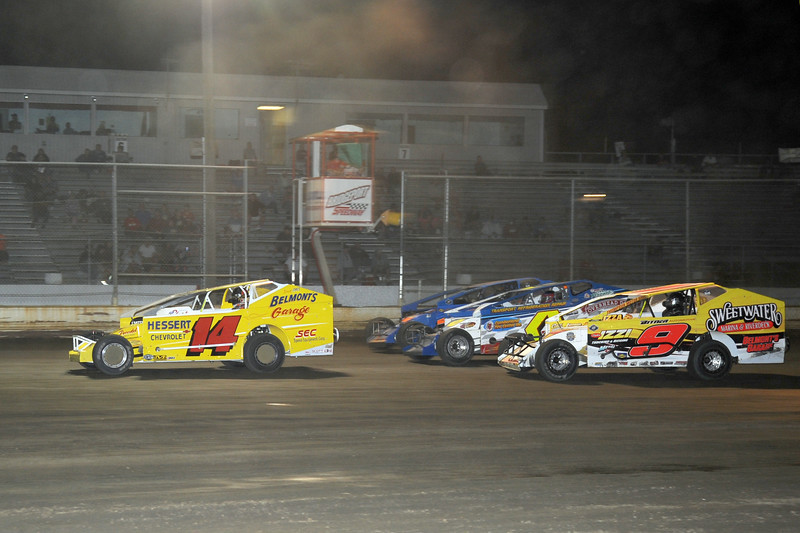 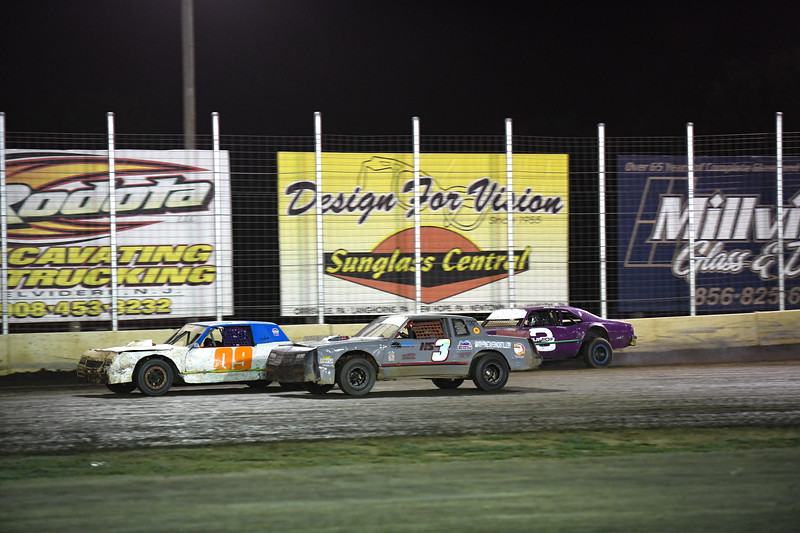 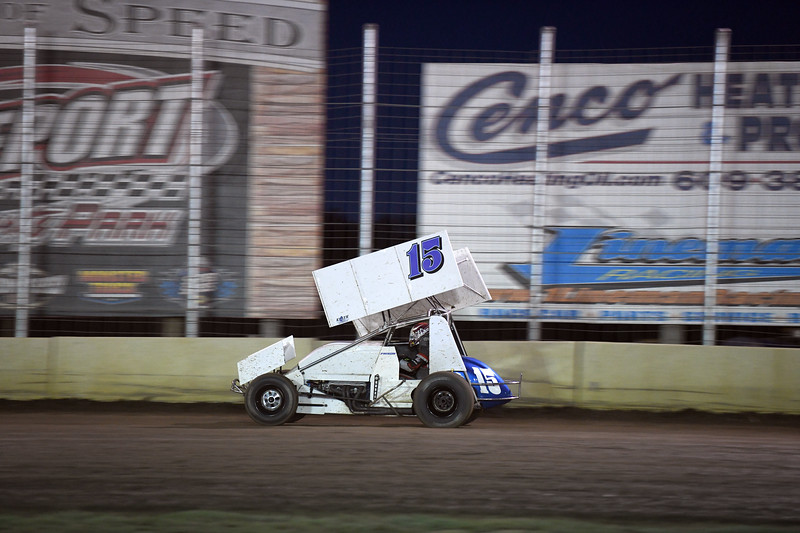 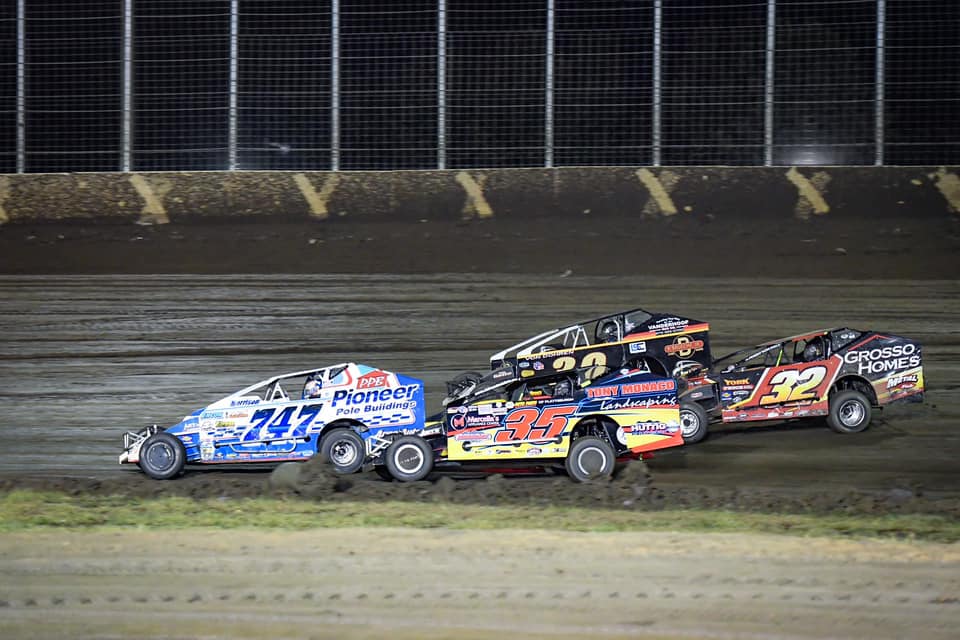 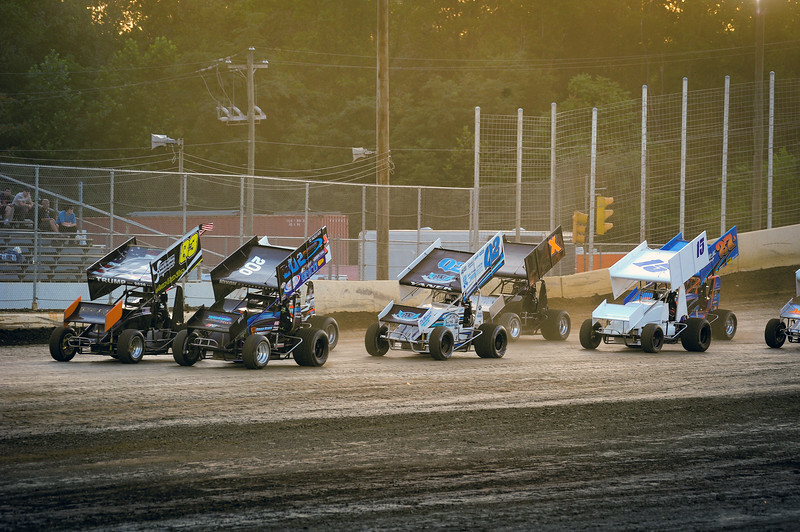